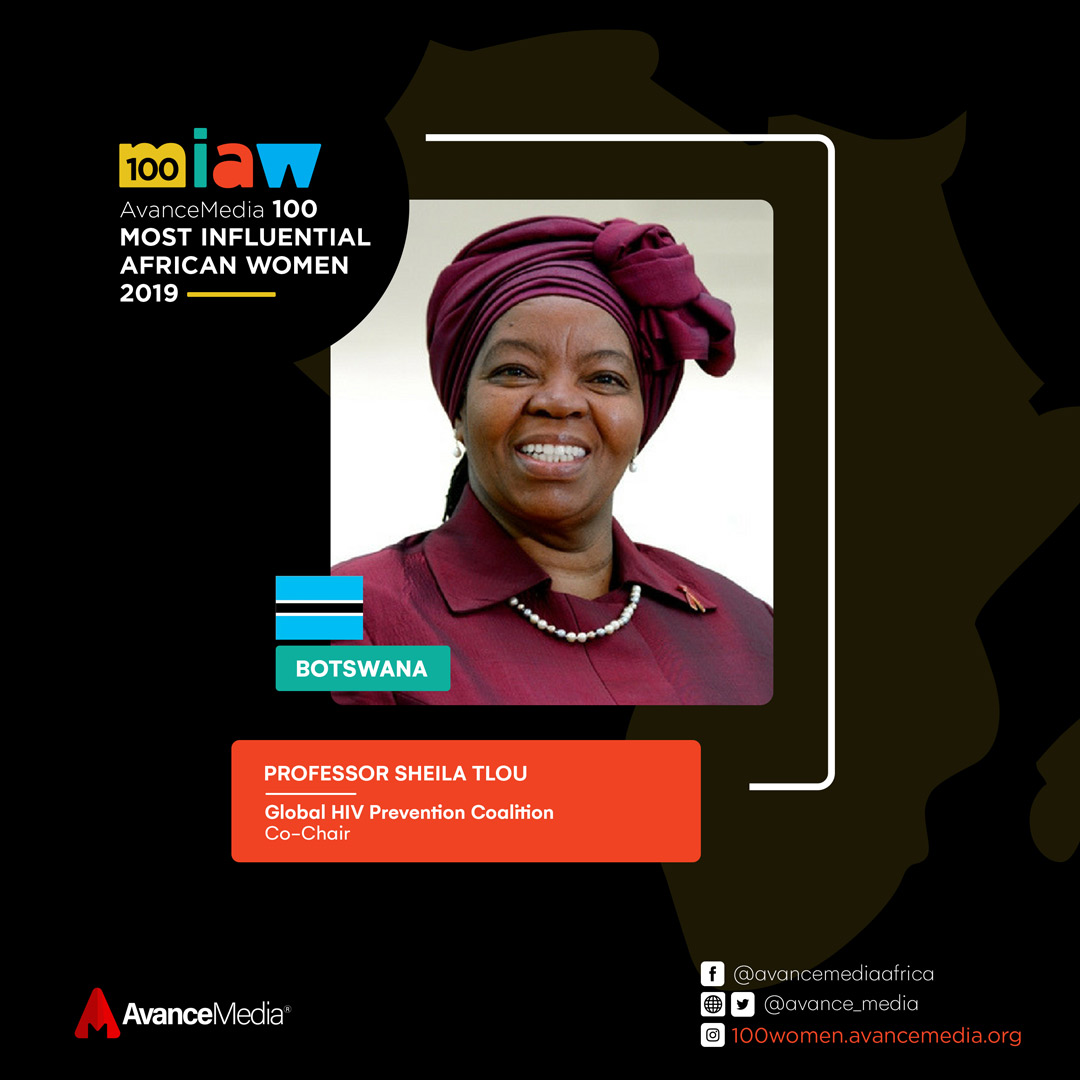 Dr. Sheila D. Tlou is the Co-Chair of the Global HIV Prevention Coalition and the Co-Chair of the Nursing Now Global Campaign. From 2010 to 2017 she was Director of the UNAIDS Regional Support Team for Eastern and Southern Africa. She is a former Member of Parliament and Minister of Health of the Republic of Botswana (2004-2008).  She is also former Professor of Nursing at the University of Botswana and Director of the WHO Collaborating Centre for Nursing and Midwifery Development in Primary Health Care for Anglophone Africa.  She has conducted research and taught courses to nursing, pre-medical and social science students on Gender issues relating to HIV/AIDS, Sexual and Reproductive Health and Rights, and Ageing and Older Persons.  She has played a key role in the development of national nursing and medical education curricula, working to broaden the scope of Health Sciences education in her home country of Botswana.

Dr Tlou has been involved in the AIDS response from the time the epidemic started in Botswana in 1985. She has worked to increase community awareness of HIV and AIDS in Botswana using youth groups, nongovernmental organizations, and grassroots women’s organizations.  She was HIV/ AIDS Coordinator at the University of Botswana from 2002- 2004 and facilitated the formation of the Students Against AIDS Society (SAHA).  She is the founder of the Botswana chapter of the Society of Women and AIDS in Africa (SWAA) in which volunteers are trained in home- based care and educate families on HIV prevention, Human Rights, and caring for people living with HIV.

Dr. Tlou holds a PhD in Nursing Sciences and post-graduate Certificates in Women’s health and Gender studies, from the University of Illinois at Chicago.  She has a Masters degree in Nursing Education and Instruction at Columbia University, and a Master of Science in Nursing at the Catholic University of America.  She completed her Bachelor of Nursing degree at Dillard University in New Orleans in 1974. She has many publications on gender issues relating to HIV and AIDS, Older Persons, Menopause, and community- based approaches to HIV prevention.  In 2001, she addressed the United Nations on ‘Women, the Girl Child and HIV/AIDS’, and participated as a panelist in side events on Women and HIV/AIDS, organized by WHO and UNAIDS at the UN Special General Assembly on AIDS (UNGAS). She has provided consultancy for the World Health Organization, UNAIDS, the International Council of Nurses, and the United Nations Commission on the Status of Women.

During her term as Minister of Health, Dr. Tlou contributed to the improvement of global health care, especially for women and girls. She led a comprehensive HIV/AIDS prevention, treatment, care and support program in Botswana whose achievements include: A roll out of ARVs and PMTCT to near universal (90%) uptake. Transmission of HIV from mother to child decreased from about 30% in 2003 to about 8% in 2008, and maternal mortality due to AIDS decreased from 34% to 9%. As Chairperson of SADC and of the African Union Ministers of Health in 2005/6, Dr. Tlou provided leadership in the adoption of the SADC Malaria Eradication Program, the SADC HIV/AIDS Plan of Action, the Africa Framework on Sexual and Reproductive Health, the Africa Health Strategy, and the Maputo Plan of Action on Sexual and Reproductive Health and Rights. Dr Tlou also represented Eastern and Southern Africa in the Board of the Global Fund for AIDS, Tuberculosis and Malaria.

In her past assignment as UNAIDS Regional Director, Dr. Tlou provided leadership and Political Advocacy for quality sustainable AIDS response in 21 African countries, from Eritrea to South Africa, including the Indian Ocean Islands of Madagascar, Mauritius, Seychelles and Comoros. She has been instrumental in the formation of advocacy bodies such as The Pan-African Positive Women’s Coalition (PAPWC) and the High-Level Task Force on Women, Girls, Gender Equality and HIV in Africa; and she initiated and chaired a High-Level Task Force on Comprehensive Sexuality Education and Services for Young People in Eastern and Southern Africa.

Dr Tlou is Co-Chair of the Nursing Now Global Campaign, which aims to raise the status and profile of nursing. Run in collaboration with the World Health Organisation and the International Council of Nurses, Nursing Now seeks to empower nurses to take their place at the heart of tackling 21st Century health challenges. The campaign runs until the end of 2020 and aims to improve perceptions of nurses, enhance their influence and maximise their contributions to ensuring that everyone everywhere has access to health and healthcare.

She is also Co-Chair of the Global HIV Prevention Coalition, initiated by UNAIDS and UNFPA, and borne out of the need to address the gap and rise in new infections despite success in treatment and care in all countries across the world. Countries have committed to reducing new HIV infections to fewer than 500 000 annually by 2020 and ending AIDS as a public health threat by 2030.

Dr Tlou has a great appreciation for fine and performing arts and has been involved in amateur theatre since her primary education. She has portrayed Precious Ramotswe, the heroine of Alexander McCall Smith’s Number One Ladies Detective Agency book series, in several amateur theatre productions in Botswana. She also starred in the Anthony Mingella BBC Movie: The Number One Ladies Detective Agency (2008)

Prof Sheila was named among the Inaugural List of 100 Most Influential African Women in 2019 by Avance Media.