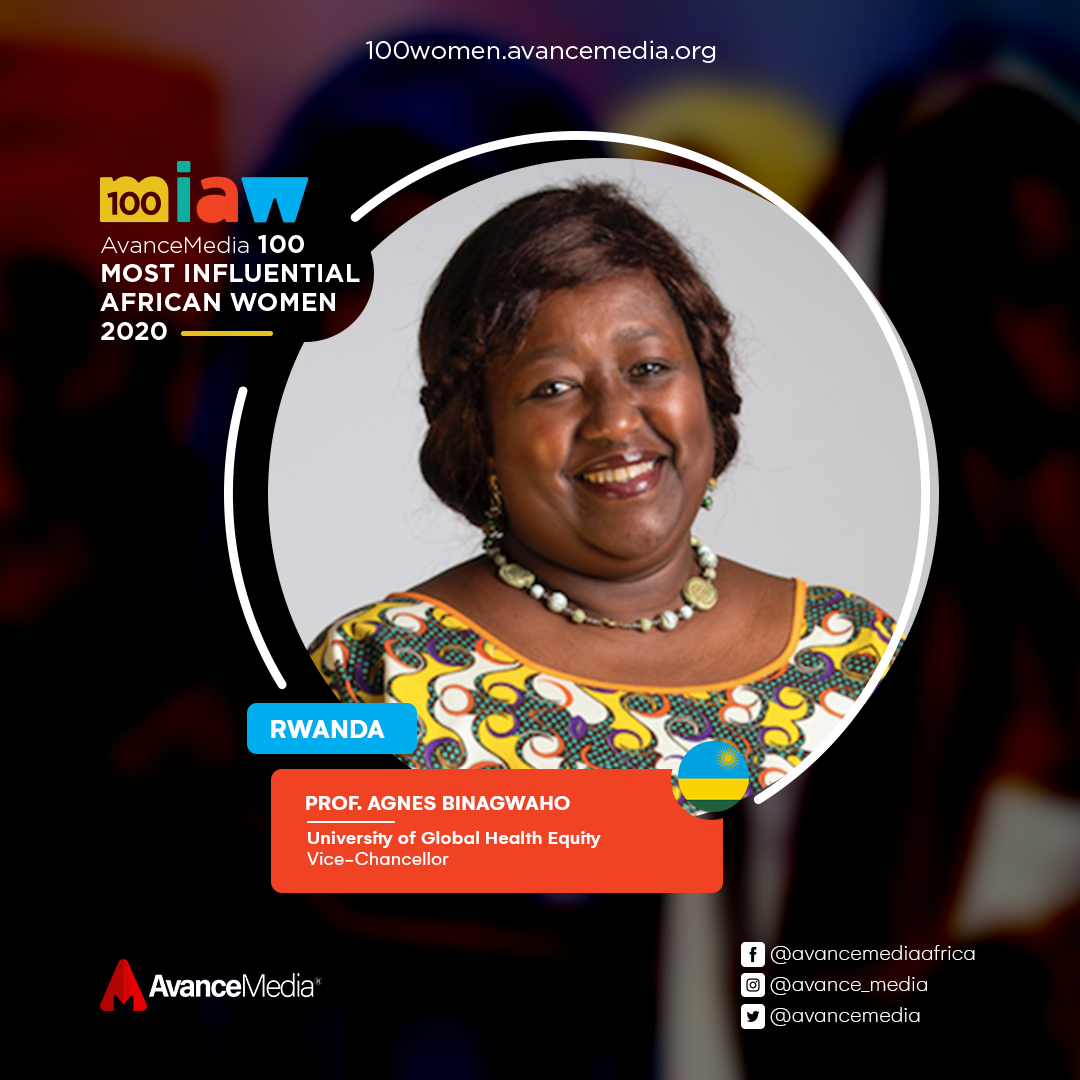 Professor Agnes Binagwaho, MD, M(Ped), PhD is a Rwandan pediatrician who returned to Rwanda in July of 1996, two years after the 1994 Genocide Against the Tutsi. Since then, she has provided clinical care in the public sector served the Rwandan Health Sector in high-level government positions and co-founded the University of Global Health Equity an initiative of Partners In Health. Professor Binagwaho currently resides in Rwanda.

Professor Binagwaho was born in Nyamagabe, Southern Province, Rwanda. When she was three years old, she and her family moved to Belgium, where her father was completing his medical degree (MD).

Professor Binagwaho completed her Medical Degree (MD) in General Medicine at the Universite Libre de Bruxelles (1976-84) and her Masters Degree in Pediatrics (MA) at the Universite de Bretagne Occidentale (1989-93). In 2010, she was awarded an honorary Doctor of Science (Hon. D.Sc.) from Dartmouth College. In 2014, she became the first person to be awarded a Doctorate of Philosophy (PhD) from the College of Medicine at the University of Rwanda. Professor Binagwaho’s PhD Dissertation was titled, “Children’s Right to Health in the Context of the HIV Epidemic: The Case of Rwanda.”

To increase her skills in health service delivery, research, and program management, Professor Binagwaho has completed a number of academic certificates. She earned a Certificate of Tropical Medicine from the Institute of Tropical Medicine at Anvers, Belgium (1984-85). At the University de Bretagne Occidentale Professor Binagwaho completed three certificates: A Certificate in Axiology (General Emergencies) (1991-1992); a Certificate in Pediatric Emergencies (1992-1993); and a Certificate in HIV Patient Care and Treatment (1994-1995). She also completed a training program in AIDS prevention and surveillance studies in Kigali, Rwanda through the World AIDS Foundation, hosted by the University of New Mexico School of Medicine’s Health Sciences Center (July-August 1997), a certificate in Health and Human Rights – Dimensions and Strategies with InWEnt – Capacity Building International (Internationale Weiterbildung und Entwicklung gGmbH) and the World Health Organization (November 2009-April 2010), and a Social and Behavioral Research Investigators Certificate by the US-based organization Citi Collaborative Institutional Training Initiative.

Since 2016 up to now, Professor Binagwaho work at the University of Global Health Equity (UGHE) in Rwanda, an initiative of Partners In Health, focused on changing health care is delivered around the world by training global health professionals who strive to deliver more equitable, quality health services for all. In 2017 she was appointed the founding Vice Chancellor of UGHE

Since 2008, Professor Binagwaho has been a Senior Lecturer in the Department of Global Health and Social Medicine at Harvard Medical School as well as an Adjunct Clinical Professor of Pediatrics at the Geisel School of Medicine at Dartmouth. She is also a Professor of Pediatrics at UGHE. Since 2016 she is a member of the American National Academy of medicine and since 2017 a fellow of the African Academy of Sciences.

Professor Binagwaho is a Senior Advisor to the Director General of the World Health Organization. She is a member of a number of international Working Groups, Task Force in Global Health for the UN, and independent organizations. She is also member of Advisory Board and Board of Director including the Rockefeller Foundation Board. She sits on the editorial board of several scientific journals and serves on multiple scientific commissions. She co-chaired the Millennium Development Goal Project Task Force on HIV/AIDS and Access to Essential Medicines for the Secretary-General of the United Nations under the leadership of Professor Jeffrey Sachs. Professor Binagwaho). Professor Binagwaho co-chaired the Joint Learning Initiative on Children and HIV/AIDS (JLICA) (2006–09). She funded the Rwandan Pediatric Society and chaired it up to 2020

She served on Rwanda Country Coordinating Mechanism of The Global Fund to Fight HIV/AIDS, Tuberculosis, and Malaria (CCM), first as a Member (2002-08) and then as Chair (2008-11. She chaired the Steering Committee of the Presidential Emergency Plan for AIDS Relief (PEPFAR), (2002-2008). During that period, she was also responsible for the management of the World Bank MAP II Project in Rwanda. Professor Binagwaho was a Member of the Rwandan High Level Implementation Committee of the Aid Policy (2009-10).